The BBC’s Idea of Impartiality….Doubt and Uncertainty

Posted on May 5, 2013 by auldacquaintance

As only one small example of the BBC’s idea of balance, fairness and impartiality, I include today their recent webcast on Independence questions, carefully selected, to put to two political newspaper editors. Alan Cochrane of the Telegraph and Andy Nichol of the Sun. Both of which are avowed Unionists. No national newspaper supports Independence, but they made no attempt to have a Scottish political journalist such as the Heralds Ian Bell for balance.
What followed for 30 minutes was a whole load of bunkum and misinformation, although to be fair, Andy Nichol did at least give a couple of fair responses, which is more than could be said for Cochrane, but that is entirely expected of his rabid views.
I could easily tear their answers to bits, but I see no need at the present time….I have covered most of these subjects perfectly adequately in the course of my 250 articles on this site.

However judge the BBC’s impartiality for yourselves.

Both journalists assert that it is only Independence supporters who are abusive on the Internet..

So let me show you that this is utter garbage from one very small example out of many. 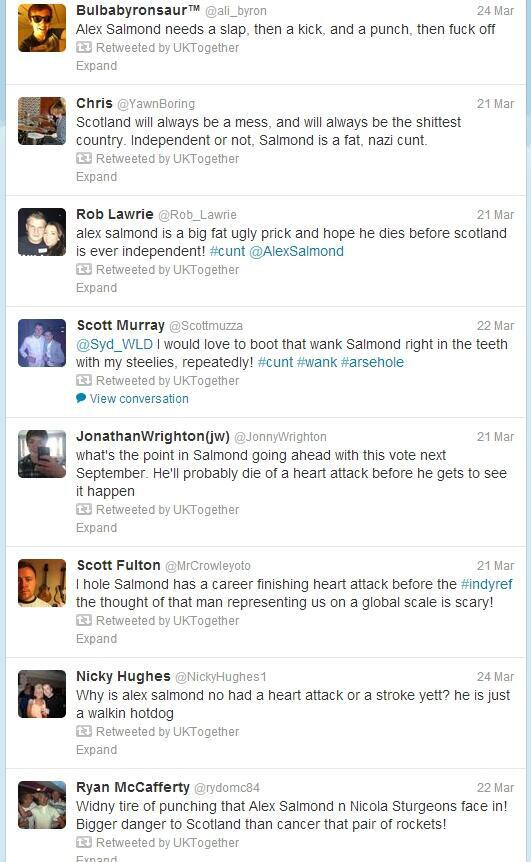 I am not a member of any political party. I am however a strong supporter of Scots Independence. Any views which I express in this Blog are purely my own. This Blog intends to be a place where I will be putting my views on Scots Independence. It will primarily concern itself with the upcoming Referendum In Scotland. However It will also be somewhat diverse in the range of day to day issues which are evident to me in modern day Scotland. Not all of it will be political, and indeed may take me off into avenues I am not even aware of yet. Please come and join in on this journey, and any comments are welcome provided they are not abusive! All the best from a new acquaintance! Rod
View all posts by auldacquaintance →
This entry was posted in Uncategorized and tagged BBC Cochrane, BBC impartiality, Scottish Independence. Bookmark the permalink.

3 Responses to The BBC’s Idea of Impartiality….Doubt and Uncertainty