A tale of two letters

Posted on September 29, 2013 by auldacquaintance

If you enter into a debate, one would normally reasonably expect you to engage with it and be prepared to stand up for the courage of your convictions, that is unless your name so happens to be David Cameron, and you happen to be the prime minister of the UK.

Back in 2009 before David Cameron became prime minister, he said the following ” “If we win the election and if, by some miracle, we don’t have 25 seats in Scotland and have slightly fewer, then I would be a Prime Minister who would want to govern in the interests of everyone in Scotland.
“I would recognise the shortage of mandate, if you like, in Scotland by getting straight up there and meeting the First Minister and saying, look, anyone who wants to try to work with me, I will work with them.” and pledged to do everything in his power to prevent Scottish independence if he becomes prime minister.

Does this sound like a man who has no interest and no contribution to make to the referendum debate? Indeed not, and he and his government colleagues have been on shuttle runs north of the border to decry independence ever since they were elected.

So here is his letter denying Alex Salmond debate. 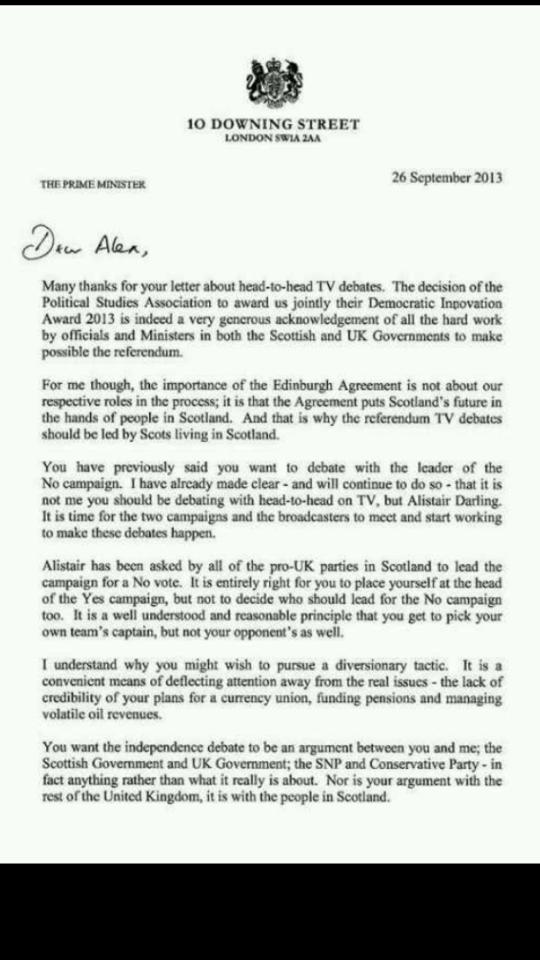 And here is Alex salmonds response to that rejection:

I write in response to your letter of 26 September in which you say that you are unwilling to debate the future of Scotland with me.

With respect, your arguments for not debating Scotland’s future are undermined by the highly political nature of your letter. You are attempting to place yourself in the position of trying to dictate the terms of the debate on Scotland’s future without being willing to publicly defend your arguments in debate. You seek power without responsibility and that is unacceptable.

In addition to that clear democratic point, there are five other reasons you should reconsider and overcome your reluctance to debate Scotland’s future:

Firstly, you quite rightly acknowledge the significance of the PSA’s Democratic Innovation Award for the joint work of our two administrations in holding the Scottish independence referendum under the terms of the Edinburgh Agreement. As the principal signatories of the Edinburgh Agreement, the natural progression in these circumstances is a televised, head-to-head debate.

Secondly the Government which you lead is central to the entire referendum debate from the perspective of the No campaign. The reality is your Government continues to make decisions affecting Scotland, such as the implementation of the Bedroom Tax and the deeply unpopular privatisation of the Royal Mail, despite the fact an overwhelming majority of people in Scotland didn’t vote for the Conservative Party. The fundamental argument at the heart of the case for independence is that decisions affecting Scotland should be taken by those who choose to work and live here. Your argument is that many should be taken at Westminster.

Thirdly, there is worrying evidence that under the current constitutional arrangements your Government intends to cut spending in Scotland. Senior Tory figures, including Scottish Tory Leader, Ruth Davidson, have called for the current Barnett Formula to be abolished. Many Tory MPs wish Scotland’s funding to be slashed above and beyond the huge austerity squeeze already taking place. This is deeply concerning and I believe that a debate on such a crucial issue should take place so you can spell out your Government’s plans to cut public spending in Scotland in the event there is a No vote.

Fourthly you suggested in Scotland last year that you had an alternative constitutional position to independence. People have the right to know what it is – if indeed it is anything at all – BEFORE the referendum takes place.

Finally, you suggest I should debate with the Chairman of the No Campaign Alistair Darling. I’m sure that other debates will take place in due course but for the reasons I have made clear the key debate has to be between the head of the Scottish Government – the First Minister of Scotland – and the head of the Westminster Government – the Prime Minister.

There’s a whole range of things that Alistair Darling couldn’t answer. For example, the people of Scotland will want to know why your Government won’t sit down and negotiate with the Scottish Government over issues such as sterling or defence arrangements, even when Westminster parliamentary committees have called for such discussions.

In any case Mr Darling’s direct opposite number in the Yes Campaign is Chairman, Dennis Canavan, the former Labour MP who has become increasingly dismayed at an out of touch Westminster system.

Following the SNP’s majority victory in the last Scottish Parliament election, you made the following comment: “I will campaign to keep our United Kingdom together with every single fibre that I have.” (Daily Telegraph May 7, 2011) You continue to direct your Government, and its taxpayer-funded resources, to make the case against an independent Scotland.

That is entirely consistent with your stated intention in the quote above. However your attempt to duck a television debate on the subject is not. Either you stand up and debate or butt out of the debate for good.

The case for a head-to-head debate between us is unanswerable. You should reconsider.

In effect, If David Cameron will not debate, then he has not the courage of his convictions, He is indeed feart,and has not the confidence in his own argument, but more than that…If he really will not engage, then he has absolutely no part to play in any forthcoming debate. He has abrogated his duty to those who support the union, and has left the field of play. Indeed the implications of his own letter are such that we can expect no British Government minister not resident in Scotland, and with no vote on the referendum, to desist forthwith from commenting and contributing to the debate. Its all down to Alistair Darling, a Labour back bench mp, who has not say in any British government decisions to make the case for the union, and if he wishes debate, Dennis Canavan as his opposite number in the YES campaign will gladly take him on, but I suspect he too might be feart of that.

I am not a member of any political party. I am however a strong supporter of Scots Independence. Any views which I express in this Blog are purely my own. This Blog intends to be a place where I will be putting my views on Scots Independence. It will primarily concern itself with the upcoming Referendum In Scotland. However It will also be somewhat diverse in the range of day to day issues which are evident to me in modern day Scotland. Not all of it will be political, and indeed may take me off into avenues I am not even aware of yet. Please come and join in on this journey, and any comments are welcome provided they are not abusive! All the best from a new acquaintance! Rod
View all posts by auldacquaintance →
This entry was posted in Uncategorized and tagged Alex Salmond, David Cameron, debate, Scottish Independence. Bookmark the permalink.

2 Responses to A tale of two letters