Posted on October 22, 2016 by auldacquaintance

I will keep this short and sweet.
Given all the uncertainty over Brexit just now, and with the possibility of another Scottish Independence referendum in the not too distant future.
Let us look at that ballot paper, but let us reverse it. 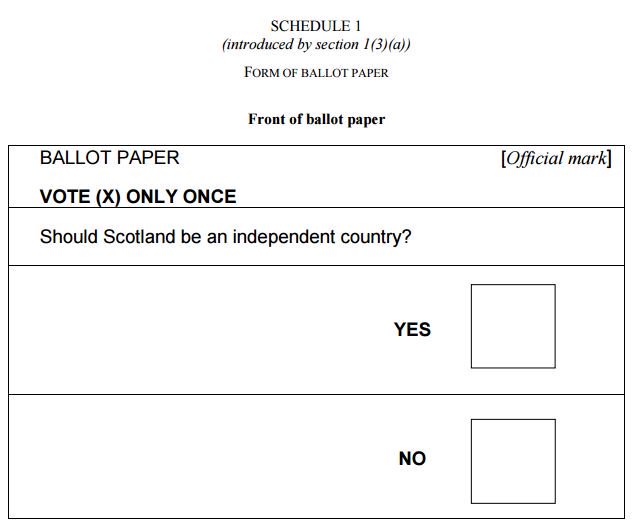 All those who argue constantly that Scotland shouldn’t be an Independent country and who are very much referendum averse because they fear what the answer might be, spend a heck of a lot of time putting Scotland down..
But what if we were already an Independent country… Can any of them give me any positive reasons why Scotland should rejoin the UK?
What is so wonderful and so much better about the UK than an Independent Scotland?
What is so attractive to them about the UK?
Why is the UK so much better for them?
Can any of them answer these quesions and convince me that being in the UK is what I should want?
I would love to see them try!

Why not ask your own Better Together friends to answer these questions, the answers might be interesting.

I am not a member of any political party. I am however a strong supporter of Scots Independence. Any views which I express in this Blog are purely my own. This Blog intends to be a place where I will be putting my views on Scots Independence. It will primarily concern itself with the upcoming Referendum In Scotland. However It will also be somewhat diverse in the range of day to day issues which are evident to me in modern day Scotland. Not all of it will be political, and indeed may take me off into avenues I am not even aware of yet. Please come and join in on this journey, and any comments are welcome provided they are not abusive! All the best from a new acquaintance! Rod
View all posts by auldacquaintance →
This entry was posted in independence, Uncategorized and tagged Independence, Scotland, UK. Bookmark the permalink.