The Thistle, the Lion and the Unicorn (taster)

I have ceased blogging to concentrate on writing my book “The Thistle, The lion and the Unicorn”
However here is a taster of the Introduction and first chapter. It is unedited as yet…so this is just the first draft with all its mistakes which I haven’t checked for yet. 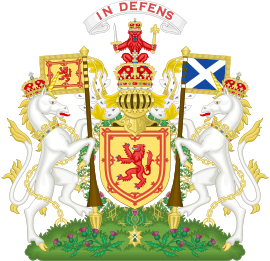 It is in this sybolism which I take for the title of this book as I reflect back in history to some of the story of Scotland from the time of the Stewart Monarchy in the 17th Century to the present day.

You will notice that in the coat of arms the Unicorn is chained. That wonderful mythical beast whilst magical and said to be capable of healing powers was also regarded as being wild and dangerous. It’s traditional enemy which it could best in battle was the Lion, and despite it’s small stature it was thought of being able to take on a large elephant and win.

Symbolic of Scotlands place in the Union perhaps?

THE Morning after the Night before

I met the morning of the 9th of June 2017 pretty much like I had met a similar morning on the 19th of September 2014. A date that will be etched in my memory for as long as I live .
On the 18th of September 2014 Scotland had been permitted to vote for the first time in it’s history on the matter of being in the British Union . It had only taken in excess of 300 years for the people of Scotland to have a say in the matter. The general populace of Scotland had never had a say in the first place back in 1707 when Scots Lords sold off Scotland for personal financial gain into the Union with England.
After the results were in on the 19th of September, Independence supporters like myself felt heart sick that we had lost by a margin of 55% to 45% . We had battled so hard, we had sung and danced and marched for 2 years, and indeed in the week leading to the vote it looked like we might actually do it.
It was not to be though. In a state of panic the British establishment on realising that they were in severe danger of losing came out with the “VOW” The “Vows” architect and author, the former failed Labour prime minister had promised that this VOW was the equivelant or even better than Home Rule and near federalism.
The Sunday Times poll showing Independence ahead by 51% to 49% only 7 days beforehand had shaken the British establishment to the core, and so in a last desperate attempt, breaking All elections laws about making new promises at this stage of a campaign, David Cameron the tory prime minister, David Clegg his Liberal Democrat deputy, and Ed Milliband the Labour leader all had their signatures attached to this mock Vow in the Daily Record.
In reality the wording of the Vow was vague and full of unspoken promises. It was Gordon Browns part which supposidly fleshed it outn to Home Rule.

Here is what the Record said on that day.

“David Cameron, Ed Miliband and Nick Clegg sign joint historic promise which guarantees more devolved powers for Scotland and protection of NHS if we vote No

WESTMINSTER’S three main party leaders have signed up to a historic joint statement that was demanded by the Daily Record on behalf of the people of Scotland.”

“David Cameron, David Clegg and Ed Milliband have signed up to a historic joint statement that was demanded by the Daily Record on behalf of the people of Scotland.

In their own words, they pledge to work together to transfer more powers to Holyrood if Scots reject independence on Thursday.

The unprecedented agreement was signed after the Record demanded that the leaders clearly explain what they are offering so the Scottish people can decide if it is a better alternative to independence. 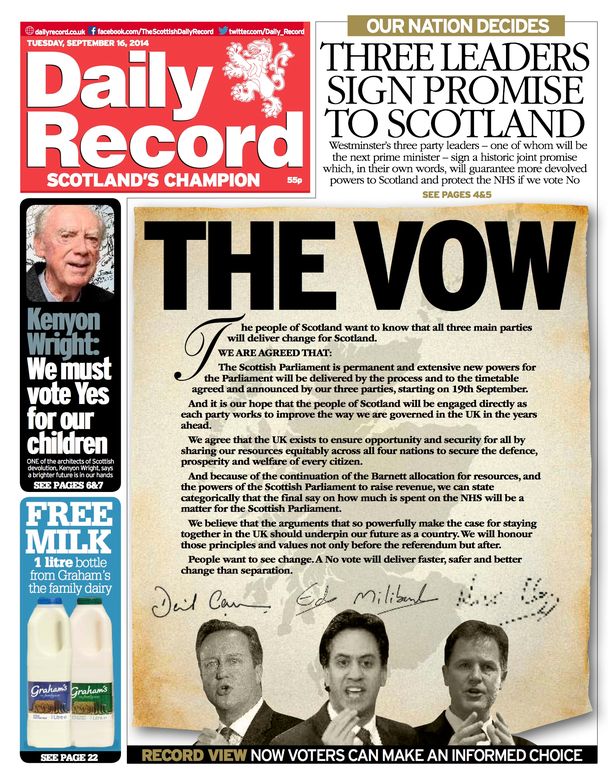 Coupled with a despicable campaign that saw Better Together campaigners targeting pensioners and threatening them that they would lose their pensions if they voted for Independence, the result was a very relieved David Cameron on the morning of the 19th of September 2014. His first action on the steps of No. 10 Downing Street was anything but the supposed promises made to the Scots. Instead he introduced EVEL ..English Votes for English Laws thus making Scots MPs as second class citizens in Westminster.

Instead of being deflated,as many Independence supporters probably were, the impression as the votes came in was that somehow the Unionists had lost and the Yes campaigners had won. There was a sense of unreality to it all.
The following weeks and year tended the bear that out. People signed up in their droves to the SNP, then the SNP almost wiped out every Unionist in Scotland in the 2015 General election, leaving One solitary Tory, Labour and libDem Mp in Scotland.
This was followed up by the SNP yet again becoming the largest party in the Scottish parliament in 2016, and winning the majority of Scottish Council seats and taking control of the Labour fiefdom of Glasgow for the first time.

In between times we had the madness of Trump winning in the States, extreme right wingers threatening but failing to win in France and Holland.
We had Brexit which ended David Camerons political career and saw in an even more right wing Theresa May and her Brexiteers.Scotland meanwhile unanimously voted to remain with the EU which put Independence back onto the table again. Not that it had ever gone away, but Thersa Mays intransigence to even consider Scottish opinion forced Nicola Sturgeon to bring the issue to a vote in the Scottish parliament and subsequently won with the help of the Scottish Green party.
The Scottish Tories and Labour and the LibDems absolutely refused to accept the democratic will of the people and the parliament and campaigned relentlessly against Scots having that democratic right to have their say again on the issue.
In reality, both the Tories and labour have been banging on about Independence since the 19th of September 2014, and have never stopped campaigning on the issue.

Ruth Davidson and her Torys made the issue their only policy for the Holyrood 2016 election, this years Council election and most recently the recent General election which Theresa May foolishly called. To be fair, she and her not so merry band have done particularly well out of it. Beating a totally woeful and innefectual Labour into 3rd place in all of these elections as Unionist supporting Scots deserted labour to vote Tory.

Which all brings me back to the morning of the 9th of June this year.
To say that I felt utterly gutted, shattered and disgusted at some of my fellow Scots would be a classic understatement.
Theresa May had fought the very worst campaign anyone can ever recall, and instead of getting her own mandate as she desired we ended up with a Hung parliament and a proposed coalition between the Consevatives and Nortern Irelands Democratic Uionist party. The worst possible and deeply worrying scenario one could possibly imagine.

Meanwhile the British media and press have been hailing Ruth Davidson and her Tories as the winners in Scotland. Nothing could be further from the truth.
Yes the SNP lost big names in Andrew Robertson, Alex Salmond and Eilidh Whiteford amongst the 21 Mps which they lost. But by no stretch of the imagination did the SNP lose the election in Scotland. The Tories on 13 seats,Labour on 7 and the Lib dems on 4 does nowhere near collectively add up to the SNPs 35 Seats, which was their second best ever performance in a General election, and are still the 3rd largest party in westminster.
Brian Taylor on Reporting Scotland completely lost the plot when he said that the Tories were the winners in Scotland.

What did transpire is that the collective Unionist campaign did succeed in tactical voting to oust certain MPs from targeted seats. In the North east where there has been a tradional Lib Dem presence the Lib Dem vote was considerably down and the Tory vote considerably up! The biggest winners or losers were the majority of voters who exceeded those that did vote in this area alone. In other areas Unionist supporters went for the best unionist party they thought had a chance of winning.
Meanwhile the SNP vote in the election was overall only down by around 1.7% from the previous general election.

The declarations from the Tories and Labour that Indyref2 is now off the table could not be further from the truth. Independence supporters and the SNP will take stock from this and learn from it.
The major difference is that the Unionist parties fought this general election on Independence whilst the SNP avoided it and concentrated on Brexit and normal election issues.
Corbyn had a remarkably better campaign in England than could be expected and even some unaligned Scottish Independence supporters voted for him and some labour people went back to their original party for this election,despite the woeful Scottish branch of the party.

What happens next? I shudder to think given the past few years!
But the story of Scottish Independence is far from finished.

Before I look forward though, I shall look back into some of the history which has brought Scotland to this day. The story of the lion and the Unicorn.

I am not a member of any political party. I am however a strong supporter of Scots Independence. Any views which I express in this Blog are purely my own. This Blog intends to be a place where I will be putting my views on Scots Independence. It will primarily concern itself with the upcoming Referendum In Scotland. However It will also be somewhat diverse in the range of day to day issues which are evident to me in modern day Scotland. Not all of it will be political, and indeed may take me off into avenues I am not even aware of yet. Please come and join in on this journey, and any comments are welcome provided they are not abusive! All the best from a new acquaintance! Rod
View all posts by auldacquaintance →
This entry was posted in #Scotref, Brexit, Council Elections, EU, Europe, General Election, independence, Nicola Sturgeon, politics, scotland, Theresa May, YES and tagged Independence, Labour, Scotland, SNP, The thistle the lion and the unicorn, Tories, Westminster. Bookmark the permalink.

9 Responses to The Thistle, the Lion and the Unicorn (taster)